Contractors will be working on and under the McHenry bridge. They will be installing bird nets under the bridge to restrict bird nesting. This bridge is a known bird nesting area. Normally, the birds are anticipated to return by end of January. Bird netting is a precautionary measure in advance of the bridge widening projects. The actual bridge widening project will commence sometime in April. The bird-netting will take approximately four weeks to complete. The work is scheduled between January 09, 2017 and February 06, 2017.  During this time, occasionally, the traffic may be restricted to a single lane. 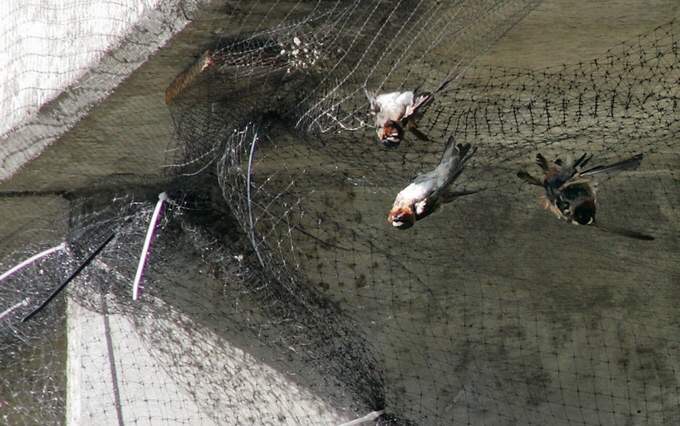 Environmental groups offer proposals to avoid Petaluma bird deaths. Swallows caught and dead in the nets under the highway 101 bridge over the Petaluma River in Petaluma.

Environmental groups have asked Caltrans to consider construction alternatives that would not harm a protected bird species that build nests under the Petaluma River bridge. The groups offered a litany of proposals to deal with cliff swallows, which became entangled and died in loose netting installed under the bridge during the Highway 101 widening project.

“Our plaintiffs’ major concern is that if we do not learn from history, then history will repeat itself,” said Danny Lutz, an attorney with the Animal Legal Defense Fund. “Last year, the cliff swallows returned to an accidental death trap. This year, it wouldn’t be accidental, but one the agencies knowingly set.”

Before construction began in February, contractors installed nets under the bridge to keep the swallows away. But the loose netting killed dozens of birds. The $130 million project to relieve traffic through Petaluma is expected to last at least two more nesting seasons. Cliff swallows spend winters in Argentina and return to the same location each March for six months. They are protected under the Migratory Bird Treaty Act.

An expanded environmental report would address the cliff swallow deaths and propose ways to protect them, said Lutz, who is representing Veronica Bowers and her Native Songbird Care & Conservation, Madrone Audubon Society, Marin Audubon Society, Golden Gate Audubon Society and Center for Biological Diversity.  One of the environmental groups’ proposals is to perform construction outside of the nesting season. “There would be no risk at all for the birds because they wouldn’t be there,” said Bowers, founder of the Sebastopol bird hospital. Other proposals include creating artificial nesting structures, covering the underside of the bridge with vinyl or plastic sheeting to deter nest-making and daily power-washing to remove nests.

A federal judge in late June denied a motion to halt the project. Caltrans lawyers said a delay would cost taxpayers $5 million to $10 million.  A spokesman for Caltrans said the agency is reviewing the information and did not have an immediate comment. The Federal Highway Administration declined to comment due to ongoing litigation, said spokesman Doug Hecox. The agencies are asking the judge to suspend the lawsuit while they consider doing more environmental study. A hearing on that motion is set for Oct. 3.

A separate law requires Caltrans to meet with wildlife groups and submit ideas for protecting the swallows before the next nesting season. Assemblyman Marc Levine, D-San Rafael, added the provision to this year’s state budget bill.